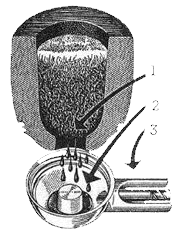 Like so many fine things, the Falcon Pipe is an American invention, patented by Kenley Bugg of Fort Wayne, Indiana in 1936.

Bugg's desire was to create a pipe that smoked consistently cool and dry. His engineering background directed him toward designing a corkscrew aluminum stem system that would twist and cool the smoke, causing the moisture to condense and be trapped in a sink he incorporated below the interchangeable briar bowl.

His patented Falcon Pipes were first produced and marketed in limited numbers in 1940, but the lack of raw materials due to the War hindered mass marketing.

In 1949, with materials available, real production began. The Falcon was an immediate success with 6,000,000 units sold in American alone by 1954. In 1963, this great American Pipe moved production to its present large plant in Britain where most of the 44,000,000 Falcon Pipes in circulation continue to be produced.