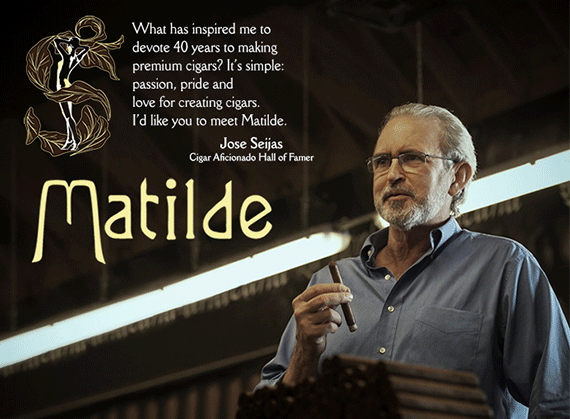 The new cigar is comprised of Dominican and Nicaraguan filler tobaccos beneath a Dominican binder and finished with specially selected Ecuadorian Habano wrapper leaves, which are cut in a specific manner to optimize burn and appearance.

Seijas, a veteran cigar blender with over 60 years experience, worked with his son Ricardo to establish an identity for the brand that pays homage to the rich history and tradition of cigarmaking in the Dominican Republic. In an interview with Cigar Aficionado Ricardo was quoted as saying,”When deciding the name to use, we wanted something that had deep roots in the Dominican Republic, that carried some tradition, my father being such a traditional person himself. Looking through old archives for inspiration, our team hit upon La Matilde, and when we did a preliminary registration check we saw that this very old Dominican brand was available. We hired a historian to dig up everything he could about La Matilde and what was happening in the Dominican Republic and Santiago during its period. With time, we realized we struck gold with Matilde’s rich history and bought the rights for the brand.”

Matilde is produced at Seijas’ La Romana factory in the D.R., which employs only a small number of rollers. The factory was established last year to support Seijas’ new “New World Cigars” venture, a company created to provide a cigar destination for the busy tourist trade in La Romana, which is located in the southeastern Dominican Republic about four hours away from Dominican cigarmaking capitol Santiago. One unique characteristic of the factory, which has been dubbed “Tabacalera La Matilde,” is that all of its rollers are also cigar-smokers with hands-on product knowledge, a mandate introduced by the senior Seijas in order to ensure a superior end product.