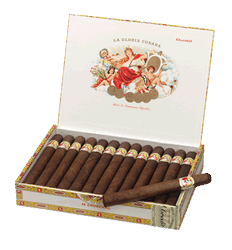 Once Little Havana’s best kept secret, La Gloria Cubana has become the cigar of choice for cigar smokers the world over who appreciate a richer, fuller-bodied smoke. Its Cuban-seed filler from the Dominican Republic and Nicaragua and its binder from Nicaragua perfectly complement the beautifully aged Ecuadoran wrapper to deliver the full, rich flavor that has earned the brand international acclaim. La Gloria Cubana Torpedo received a stunning 98 rating in Cigar Aficionado magazine. Marvin Shanken, publisher, hailed the cigar as “one the most delicious aged non-Cuban cigars I have ever smoked.”

La Gloria Cubana has become a favorite of cigar smokers everywhere. Available in an array of sizes, in both Natural and Maduro varieties, La Gloria Cubana"s special blend of Dominican and Nicaraguan filler and binder become one with its beautifully aged Ecuadoran wrapper to deliver the full, rich flavor that is its trademark.